Priezzo is a hamlet within the municipality of Tremosine sul Garda, located on the road connecting Pieve to Vesio, near Musio and Sompriezzo, and it is located at an altitude of 431 meters above sea level. The name of the village is probably of Latin origin, derived from the noble name "Precius" - this is also supported by findings of Roman traces.

The village of Priezzo is of simple, but breathtaking beauty - all travelers should allow themselves enough time to visit the village, with its unique winding streets.

The Church of the Visitation

One of the main sights in the village is the Church of Priezzo, dating back to the 17th century, and dedicated to the Visitation of Mary. This church was built in 1619 on behalf of the neighborhood della Correggia (known as Corèsa in dialect), formed by the hamlets of Musio, Priezzo, Secastello and Sompriezzo.

The building has a single nave, and the main altar is decorated with an altarpiece by Nicolò Grisiani, a seventeenth-century artist from the nearby town of Salò.

In Priezzo there are also two votive shrines - one is dedicated to Sant’Antonio, and it depicts the saint with the Child. It is located at the beginning of the village, and it was recently restored.

The other is dedicated to San Giuliano, and it is located along the road that leads to the Brasa Valley, which starts just after the houses, beyond the church. Once, the shrine was decorated with a fresco, which today is only barely recognizable.

The patron saint’s day in Priezzo is celebrated on May 31st. 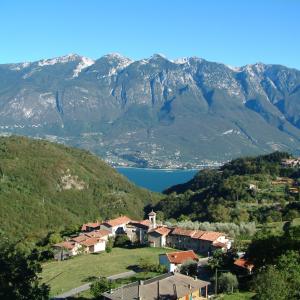