Passo Nota, on the border with Trentino, is one of the most interesting places in the Alto Garda Bresciano Park. It’s located at 1208 meters above sea level, and you can reach it on foot, by mountain bike or by car.

Passo Nota, from the Romans to the Great War

Ever since Roman times, Passo Nota connected Tremosine sul Garda to present-day Trentino, a region that was the location of several battles, especially during the Austro-Hungarian era. In 1796, the Austrian army defeated in Lonato by the French marched through it, whereas in 1859 the Austrians crossed it directed to S.Martino and Solferino. In 1866, the army of Garibaldi also stopped on the pass before the battle of Bezzecca.

On the pass and around you can also learn more about the Great War, that has greatly impacted the lives of those who lived in these border areas.

Walking on the mountains between Tremosine sul Garda , Riva del Garda and Val di Ledro, you will discover several fortified lines, trenches and forts that were part of the Alto Garda defensive line.

One of the easiest walks to reach the fortifications starts from Vesio - you can park your car at the Passo Nota Rifugio Alpini (mountain hut).

Adventurers can reach Passo Nota and continue towards Tremalzo by mountain bike, or trekking. Paths around Passo Nota allow hikers to learn more about the history of these lands, surrounded by unspoiled nature - including places like green Val di Bondo, beautiful Punta Larici or the views over Lake Garda, some of the most beautiful in the region.

The fortified lines of the Alto Garda Bresciano Park have been mapped almost completely. It was discovered that in the territory of the Park there are 840 trenches, varying in length between 800 meters and 3 kilometers. 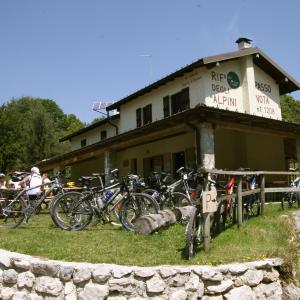