The village of Cadignano is located at an altitude of 502 meters above sea level, on the municipal road from Pieve to Sermerio, just beyond Pregasio. The name of the village probably derives from (Predium) Catinius, in turn deriving from the Roman noble name Catinius with the Latin suffix -anum, to indicate ownership of a farm.

The picturesque village was mentioned for the first time in 1192. History has left its mark in Cadignano, during Napoleon's rule and during World War II. Nowadays, Cadignano has become a popular tourist destination, thanks to its proximity to Lake Garda that allows water sport lovers to have fun and and relax surrounded by nature, making this village their base for the summer holidays.

This small church, symbol of the village, was built around 1770 and it is dedicated to Santa Maria della Neve, celebrated every year on 5 August. The square opposite the church is also dedicated to the Madonna della Neve. The small church has a single nave with three bays of different size. The bell tower can be accessed directly from the central bay. The painting on the altar dates back to the 18th century and represents the Holy Family, with St. Anthony of Padua. Not far from the church it’s possible to see the fountain of Cadignano, with a large basin once used to wash clothes.

The Cadignano - Ponticello - Prabione (part of Tignale) path, starting in Cadignano, is a path of historical relevance and and natural beauty. In the past, the path represented the only link between the two villages for the transport of firewood and coal, that it was carried by people or on the back of mules. Nowadays, the path is a popular destination - the main point of interest is the stone bridge spanning the deep gorge of the Tignalga river, probably of Roman origin. 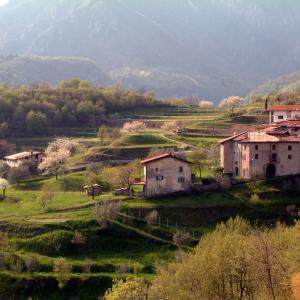