Pregasio is a historic village overlooking Lake Garda, on the road that from Pieve leads to Sermerio, 478 meters above sea level. The name comes from a compound of the Latin prefix “pre”, which means "in front" or "meadows", and from "gas", meaning "forest".

Pregasio’s Church and its traditions

The church of Pregasio was built in 1564 during the Venetian rule and completed in just over a century, with the construction of the bell tower and the wall surrounding it. Once upon a time, this little church was visited by processions of worshippers  in case of drought and pestilence.

The church is dedicated to San Marco Evangelista, as it can be seen from the 17th century altarpiece, depicting the Saint with an Angel. Instead, the side altar is dedicated to the Madonna of Health. In the past, the San Marco festival was celebrated every 25th of April - the church and the village were decorated tree and olive branches, people would dress in traditional costumes and invite relatives and friends to eat roasted goat and "spongadì", Tremosine’s traditional cake.

The road on the right hand side of the church leads to a steep path, which takes you directly to Campione. Going down, you will pass through the place known as Lò, the site of an ancient stone quarry and, about halfway through, you will see the artificial dam that was connected to the power plant of the Campione cotton mill.

In Pregasio, during the First World War, a military cableway arrived directly from the lake, transporting goods. Its remains can still be seen in the village. 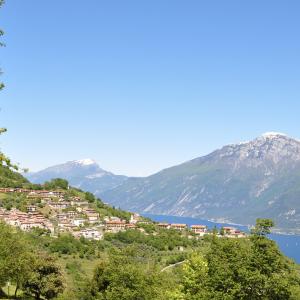