Villa is one of the hamlets that form Tremosine sul Garda, located at 551 meters above sea level. It is a small, picturesque mountain village.

The place's toponym is reminiscent of a medieval settlement. It derives from the Latin "Villa" which means "country house" or "farm" - nowadays, the meaning of the word refers to a small settlement, exactly what the village is today. Opposite the church you will find a small, colourful square, full of flowers, ancient objects and copper pots dangling from the ceiling. Until the last century there was also a skin tannery, located in the valley near Villa.

The Church of the Blessed Sacrament

As mentioned, in the district called "Césa de Vila", there is a small church dedicated to the Blessed Sacrament, which dates back to the 16th century. It was built on a small earlier chapel - traces of its frescoes at the base of the bell tower still survive. The painting on the high altar, dating back to the 17th century, represents the Risen Christ with St. Francis, St. Charles and the four evangelists.

In the past, the parish church of Villa was a destination for worshippers seeking help during droughts or plagues. In the small square of Villa there is a small votive shrine, dedicated to the Madonna of the Divine Love, and called "Capitel de Vila".

Villa’s patron saint is celebrated on the day of Corpus Domini. 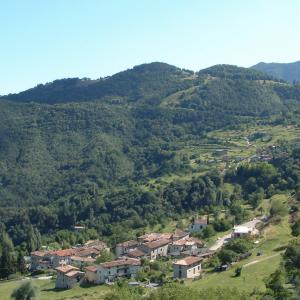