Even the small village of Cadignano has a church dedicated to the Madonna della Neve, a symbol of gratitude for the gift of family love, and love for the Virgin Mary.

The church was probably built towards the end of the 18th century - the date of completion is not certain, but the work for its construction almost certainly began around 1747, the date when the bronze bell was cast.

The work lasted for several years - a report dated 1760, contained in the archives of the municipality of Tremosine sul Garda, mentions of a pastoral visit of the Bishop of the time, but it does not mention the presence of a church. However, in 1777 there is mention of a small chapel dedicated to the Madonna della Neve (Virgin of the Snow).

It is not known for sure who was responsible for the construction of the chapel. More than likely, it was the inhabitants of the village of Cadignano who promoted the project.

The interior of the church of Cadignano

Over the years the church remained simple and not heavily decorated, as if to maintain the initial idea of ​​a simple church.

Over time, this idea was partially abandoned, and the church underwent  major restoration works after the Second World War, promoted by the archpriest of Tremosine in collaboration with the painter Valentini from Trentino. The restoration continued during 1965, when the most important work was carried out, including restoring the bell tower.

In the early Nineties, restoration works were completed, and a new floor was laid, returning the small church to the simplicity of its past. The interior is divided into three small naves, and from the main one you can reach the top of the bell tower. The decorations and liturgical objects such as crosses and candlesticks are linear and very essential.

Above the main altar, the only altar in the building, there is a small altarpiece depicting the Holy Family.

The small church is dedicated to the Madonna della Neve (Madonna of Snows): according to tradition, the Madonna appeared to a Roman couple in 352 AD, in the night between 4th and 5th of August.

The couple could not believe their eyes, and they went to the Pope to tell him that the Virgin had announced that snow would fall on one of the hills of Rome.

There they would have to build the church dedicated to her. At dawn on August 5, a heavy snowfall fell on the Esquiline Hill of Rome. 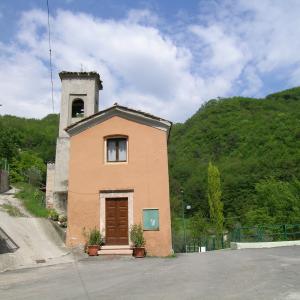 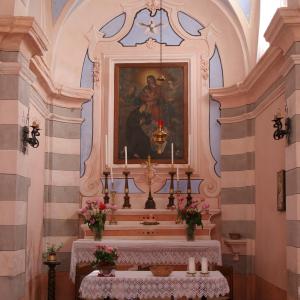