The starting point of this itinerary is La Pertica, near Voiandes. You will then cross the village of Voiandes, located 600 meters above sea level, with a stop to visit the small eighteenth-century church dedicated to Saints Vincenzo Ferreri and Antonio da Padova.

After crossing Piazza Borromeo and via Era, you’ll be surrounded by the nature of Tremosine sul Garda, until you will reach Sompriezzo, more precisely Via del Rebaldino, and continue to Piazza Madonna della Salute. Sompriezzo deserves a quick stop to visit the village church, dedicated to the Madonna della Salute, and built in the second half of the 1700s.

In Sompriezzo we’ll proceed along viale Marunera and then via Musio, until we’ll reach the village of Musio. From the the 556 meters of altitude of Sompriezzo we’ll have descended further to the 480 meters of Musio, which also has a beautiful eighteenth-century church that was restored during the last century.

After a short walk from Musio you’ll arrive in Priezzo, at an altitude of 431 meters above sea level. Before heading back into nature, it is worth paying a quick visit to the Church of the Visitation, built in 1619 by the villages of Secastello, Sompriezzo, Musio and Priezzo, which together formed the neighborhood of Correggia.

After visiting the church, take the road that leads to the Brasa Valley, along which there is a votive shrine dedicated to San Giuliano.

The Brasa Valley, wide and lush, once housed mills, sawmills and blacksmiths' forges, which worked metal and timber from the forests of the Alto Garda Bresciano Park, using the energy of water to power machinery. There you’ll also find a mill, no longer in use since 1961. Around the forges and artisan workshops, one of the numerous paths of the plateau also starts.

Following the via Brasa, which runs along the stream of the same name, and passing Rio Brasa, you will reach Villa, a picturesque rural village 551 meters above sea level, with secluded and romantic corners right next to its sixteenth-century church dedicated to the Blessed Sacrament.

To return to Voiandes, take Via Monsignor Zanini.

Good to know! This itinerary is one of the guided tours offered by the Pro Loco of Tremosine sul Garda, included in the Welcome Card: find more information HERE. 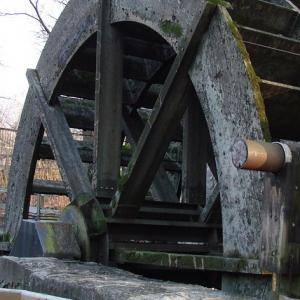