Tremosine sul Garda and its villages date as far back as the Etruscan period - traces can still be found today in the historic centres of the villages, and in various locations in the area. Even Tremosine’s name, according to historians, could derive from the Etruscan Tremusina. This itinerary will lead you to discover the ancient past of these places: history lovers, grab your boots and come with us!

The first stop on this route is Pieve di Tremosine sul Garda, one of the most beautiful villages in Italy. On the site where now the church of San Giovanni Battista stands, once there was a Celtic temple dedicated to the god Bergimo, protector of the mountains. The temple was destroyed and in its place the first Christian church in the area was built  around the fourth century, when the first Tremosine sul Garda Christian community was founded by Vigilio, the bishop of Trento at the time. From a Roman tombstone found in Tremosine sul Garda and then transported to Verona, we learned of a certain Sesto Digido Primo, a builder from Brescia who, following orders of the Deurioni, restored a temple to the god Bergimo, a divinity of the Cenomani from Brescia.

Continuing along the provincial road you will reach Villa, the second stop on our historic itinerary. The beautiful country church is one of the oldest rural chapels in the whole area, and it stands on an ancient pre-Christian temple. The building took its current form only around 1500, while the bell tower dates back to 1650. Its orientation with the entrance facing the mountains, and the main altar towards the valley, allows worshippers to pray facing east towards the sun, the symbol of God.

The third stage of the itinerary in history will take us to Voltino, where the Church of San Lorenzo is located, built on a natural terrace where pagan places of worship once stood. In the walls inside the Voltino bell tower a funerary tomb was found, evidence of an Etruscan settlement. The plaque bears a bilingual inscription, with a section written in Roman characters, and a part in Etruscan characters or a variant of Rhaetian or Celtic. Since 1857, the plaque has been kept in Brescia.

The fourth stage and final destination of our itinerary in ancient history is Ustecchio, a settlement of Roman origin. In Mure, on the provincial road, you can admire a Roman headstone walled in a votive shrine, dating back to the first century AD.

The historical heritage of Tremosine sul Garda is vast, and certainly not limited to Etruscan times: to find out more you can visit the section dedicated to the villages and their attractions! 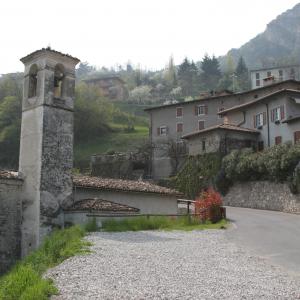