Green, fruity, fragrant - olive oil is one of the products that best represents Lake Garda. This is why it is often called ‘Oro del Garda’.

It is a typical gastronomic delicacy from the shores of the lake, and since 1998 it has obtained the PDO recognition - standing for ‘Protected Designation of Origin’.

The oil produced in the Tremosine sul Garda area, and on the Brescian shores up to Salò and Sirmione, takes the name of Garda Bresciano Extra Virgin Olive Oil PDO: its specificities in regards to color and organoleptic characteristics are described minutely in the Garda Olive Oil specification documents.

In the area of ​​Tremosine sul Garda there are more than 400 olive oil producers in the Possidenti Oliveti agricultural cooperative. The result is a niche product obtained mainly from the Casaliva, Frantoio and Leccino olive varieties.

The Mediterranean climate of Lake Garda has allowed the cultivation of the olive tree since Roman times. The same mild climate is also found at higher altitudes, favouring the growth of olive trees up even in mountainous areas.

When ripe, the olives are harvested by hand in the territory of the Alto Garda Bresciano Park and subsequently squeezed using a millstone. All the oil is worked when cold, to maintain an unadulterated taste and guarantee high quality.

At these latitudes, olive oil has a soft fruity flavor, not excessively spicy, unlike oils produced further south.

Extra Virgin Olive Oil is the star of several Tremosine sul Garda recipes such as Formagella in oil or polenta cùsa. But to appreciate all its aroma, taste it as is, with a slice of white bread.

The producers of Garda Bresciano Olive Oil PDO gathered in a consortium with the aim of protecting and promoting this product, symbol of a land with a unique food and wine tradition. 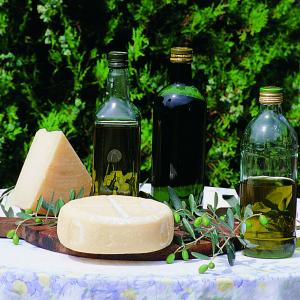