Capù is a traditional recipe from the Tremosine sul Garda area - a ‘poor’ dish made with chard and bread in the shape of a ‘roll’, or rather, a very tasty ‘package’!

Chard is a very versatile food, found in several typical Italian dishes, especially on the tables of the Northern part of the country. It lends itself to being eaten boiled or sautéed with a little oil, but here it becomes the protagonist of a really delicious dish.

In this tasty roll, there are some traditional Tremosine sul Garca ingredients such as aged cheeses, suitable for grating, as well as olive oil, drizzled on the capù to complete the dish.

In the stuffing we also find grated bread, garlic, parsley and eggs - these ingredients form the base of many fillings, to which ingredients from Tremosine sul Garca and finely-cut chard leaves are added.

The chard leaves should be closed with the help of kitchen string to enclose the mixture. At this point, our capù are ready to be cooked in boiling water.

Once cooked, these chard ‘packages’ should be cut into slices, sprinkled with excellent Garda DOP olive oil and served hot. Did we make you hungry?

Capù is an iconic dish from the Lombard gastronomic tradition, and on Lake Garda it becomes even more special, thanks to olive oil and other products from the pastures of Tremosine sul Garda.

In the whole of Lombardy we can find several variations of these rolls, such as those from Bergamo, made with savoy cabbage stuffed with minced meat.

Normally they are served as a starter, but you can also combine them with malga cheese or cured meats produced from animals raised in the Alto Garda Bresciano Park.

A curious fact about capù? These rolls are very famous in the nearby Bergamo valleys, and it seems that they are called in this way to recall the dialectal name of the bun, the traditional hairstyle for women of the area. According to another version, the capù is capon, a farmyard animal raised by Lombard peasants. 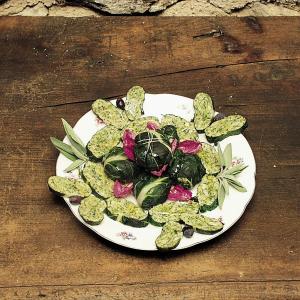