The Bondo Valley is an area of ​​stunning natural beauty, and a real hiker’s paradise. In 1980, it was established as a nature reserve.

Things to do in the Bondo Valley include discovering the remains of the WW1 forts and defensive lines that extend from here to the pass, or wandering through the fields and pastures of the valley before stopping for a picnic in nature.

If you continue heading north you can reach Passo Nota, either on walking paths or along a comfortable paved road.

The origins of the Bondo Valley

More than 10,000 years ago, when the climate began to warm up to become Mediterranean, the glaciers covering the Lake Garda area retreated, leaving a hollow basin behind. Hence the name Bondo, from the Celtic "bunda", meaning basin.

Over a period of several centuries, the valley was dug up by the river of the same name, which then joins the river Brasa that flows towards Lake Garda, but over the years debris settled on the valley floor, creating a flat area with a sandy bottom.

Trekking along the border line

Nowadays, you can go Nordic walking, trekking or cycling along the paths used by WW1 soldiers to reach the northernmost fortifications, discovering war history and at the same time immersing yourself in wild and unspoilt nature.

It’s also possible to reach Tremalzo following an unpaved road, either on foot or by bike for experienced cyclists.

Houses and farms in the Bondo Valley

In Bondo Valley there is a farm, some agriturismi (farmhouses), fully equipped picnic areas and a gravel pit.

During the time of Venetian domination, one of the captains of the Republic used to stay right in Bondo Valley. His house still stands today, and it is known as "ca dei dogi".

A curious fact about Bondo Valley

After very rainy seasons, the valley floor fills with water forming a lake, in the same location where once a real lake used to be. 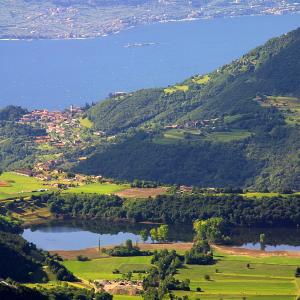