Reaching Tremosine sul Garda through the Strada della Forra is already an adventure in itself, but for those looking for a serious workout, or just wanting to discover how to reach Pieve before its construction, there is also the scenic Porto-Pieve Trail.

The Porto-Pieve Trail was used by merchants, smugglers and people from Tremosine sul Garda, heading from the port near Campione on the shores of Lake Garda, to the village of Tremosine sul Garda. Until the early 20th century, those who wanted to get to Tremosine sul Garda had to follow a long route on mule tracks and paths that connected the town with other surrounding areas. From here, locals transported coal, flour and other products to the top, first carrying everything on their shoulders, and then using the rope cableway.

At the end of the 19th century, thanks to the rope cableway, transporting goods became easier. However, reaching Tremosine sul Garda on foot was still something that the people of the plateau who worked in the cotton mill of Campione and in neighboring villages still needed to do every day.

Near Campione, where the trail ends, there was a small port where barges were moored, and boats carrying basic goods stopped by.

The construction of the western Lake Garda Road in the 1930s made the port fall into disrepair, and as a result the Porto-Pieve Trail was almost abandoned.

The starting point is located in the village of Pieve, next to Piazza Cozzaglio, where you will be able to rest and enjoy spectacular views once your excursion is over.

The path ends at Cimaporto, from the dialect ‘n yesma pórt’, meaning ‘above the port’.

All trekking enthusiasts are advised to take on the Porto-Pieve Trail with appropriate hiking boots.

In February 2018 the Trail was reopened, and it is now fully secured and accessible to everyone.

A curious fact about the Porto-Pieve Trail

Along the way you will find various traces of urban development including water basins, bridges and numerous rocky stairways, all surrounded by lush nature where you can admire olive groves, fragrant broom bushes and rare species of plants such as the Judas tree and the manna tree. 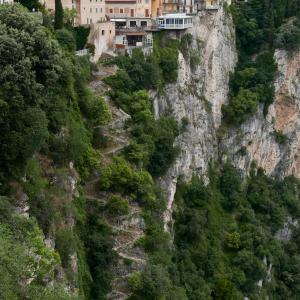