The Easter week is full of events in Tremosine sul Garda!

Between food, ancient events and moments dedicated to children there are plenty of traditions to enjoy in Tremosine sul Garda during Easter time.

Easter: the game of s-ciapì

At Easter time, traditions are dedicated to children: ancient games from Tremosine sul Garda’s past are played, in memory of times gone by.

This game is played with eggs, symbol of the beginning of a new life and of rebirth in the Christian tradition. The eggs are painted using natural dyes and finally decorated with fragrant herbs and citrus peel.

The game consists in holding an egg in your hand, while the challenger hits it hard with another egg. The person whose egg is the last to break is the winner and gets all eggs, to be eaten on Easter Monday!

According to another version, the first person who manages to break the egg with a coin wins - the prize is not just the loser’s egg, but also the coin!

Easter celebrations in the past

Lent in Tremosine begins with the evocative Rito dei Sacri Tridui, on the day of the "Ashes". Once upon a time, this tradition followed the “rogo della vecchia” (burning of the old lady), a pagan rite happening on the Thursday halfway through Lent.

A bonfire was lit with a symbolic meaning, and a puppet was burned to get rid of all the old and negative things of life, thus entering the Easter period with renewed positivity.

In the past, during the "spring cleaning" happening the week before Easter, the children of the village were in charge of cleaning the fire chains. According to the tradition, they went from house to house to collect the chains, and then dragged them along the narrow streets of the villages until they became shiny and clean. In return, they received eggs, the undisputed symbol of Easter!

In addition to this, on Good Friday, the last holy day before Easter, the village of Pieve used to be all lit up with the light of candles placed on windowsills, to accompany the night time procession with their light.

One of the most famous Easter specialties in Tremosine sul Garda is the spongadì, a sweet ring-shaped cake. The Easter version has slightly different ingredients and the shape of a dove.

This delicious, crumbly dessert is eaten with other Easter specialties such as hard-boiled eggs and Sangiòle, a country salad. The traditional Easter dishes are perfect to be enjoyed in the spring, surrounded by the green meadows of the plateau.

In Tremosine, religious processions are still very popular with locals, a sign of a strong link with the Christian tradition. An peculiarity of Tremosine sul Garda is the presence of no less than 13 churches. Almost one per village! 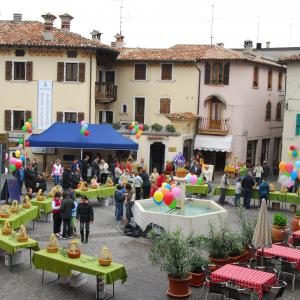 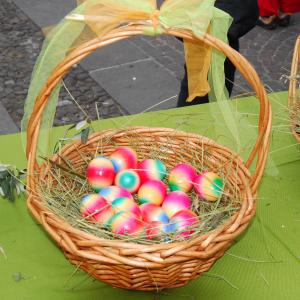